← Is Punishment Still the Name of the Game?
Police Encounters #5: No Words Spoken →

The Unshakeable Fabric of a Preacher 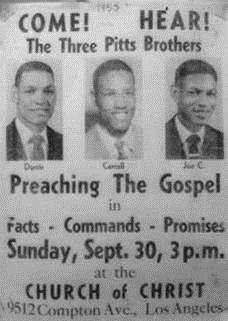 Bro. Dorris Pitts was the model example of what it meant and means to be a Christian, minister, preacher, and friend. He typifies The Unshakeable Fabric of a Preacher. From the moment Dorris Pitts asked me to be the preacher of the congregation, my life has been qualitatively and radically changed. Through his uncanny ability at being a walking inspiration, he ignited a biblical spark for exegesis and Christian living that continues to burn within my soul. Many of the current California Bay Area preachers were trained and mentored by Bro. Pitts. Men such as Joe C. Pitts, Willie Brown, Sr., Sammy L. Jones Sr., Dr. Carl Brinkley, Lee Henderson, James Walker Sr., Solomon (Teddy) Jones, Greg Brinkley, Chris Brinkley, and more. Because of the tremendous impact of Dorris Pitts — all of these men continue to be passionate preachers of the gospel.

Not many men can speak of such a rich legacy, but this is the fruit produced by Dorris Pitts. God selected him to be one of His vessels to spread the gospel message and disciple countless souls in the kingdom. Not only was Bro. Pitts a relentless developer of preachers, there are people all over the nation that he baptized and taught, including my wife. Bro. Pitts was a master at didactic teaching, developing a process that allowed his students to retain biblical information, replicate the process, and baptize believers. I can recall three layers to his proven method that all his students and members could share: 1) The Gospel, 2) The Doctrine, 3) The First Principles.

Dorris Pitts always exemplified a positive spirit. I never saw him visibly sad. I never heard him utter a negative thing about a soul. I never heard him engage in gossip, slander, or ridicule toward anyone. I literally watched Dorris quietly laugh away unwarranted critique and I never saw him render evil for evil. He was the ultimate model of Christian living and the essence of The Unshakeable Fabric of a Preacher

Sometimes people with such a consistent zeal and passion for God are taken for granted because they make the Christian life look easy. Bro. Pitts actually said to me during many of our private conversations, “For the real saints, Christian living is easy.” Although serious he always made this comment with a smile on his face and a low-tone laugh.

Before becoming the Minister of the West Oakland congregation, I was not trained by Bro. Pitts. I was multiple generations removed from his peer group and also lived across the bridge in San Francisco. I was groomed for ministry at the Uptown Church of Christ by my father and elder John Jeffrey, the Late J.M. Butler Sr. (Uptown Minister), James E. Austin (Uptown Minister), and the Late Tino Serrano (Uptown Youth Director). Around the age of 27 or 28 Bro. Pitts started asking me to preach for his congregation on occasion. Preaching for his congregation was always an interesting encounter because the spirit, tone, and emotion was almost the opposite of what I was accustomed to at home (Uptown). West Oakland was reserved, a bit quiet, and felt ultra conservative. At the time Uptown was outwardly and dispositionally active, lively, and spiritually free. The last thing on my mind was the thought of becoming a preacher at 12th & Linden.

It can only be the sovereignty and providence of God that worked through Bro. Pitts in him asking me to become the new preacher of the house he built. Yes, I had preached there a few times, I was then married to my wife who was raised there, but I was not one of his mentees. I had even attended two gospel meetings with my wife (I think at the time we were engaged) while they were trying to find a new minister. One of the men that came to town seeking the position was the Late Darryl Holt. I was so impressed with Bro. Holt; he was a preaching machine and I could not wait to have him as a preacher in the Bay Area. In the end it did not work out financially, but again, at that time the last thing on my mind was becoming the preacher at the West Oakland congregation. I had other preaching offers at the time, but I had no desire to leave Uptown.

Right before my wife and I were married or right after, I made an agreement with my wife
that I would not become a preacher of a congregation. However, one night Bro. Pitts (her childhood and current preacher) called me out of the blue. In all the times I had preached for him, he never hinted at wanting me to be the new preacher. Not once! So when he called and asked if I was interested in becoming the new preacher and taking over for him, I was baffled, shocked, and confused. I told him I would think about it and never called him back. However, days later my father called me and said “Bro. Pitts called me 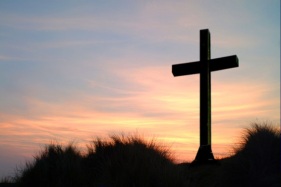 and said you have him in a bind because you are not calling him back.” I was thinking, “how is my father now involved in this? It must be serious.” By this time I was about 29 years old. I called Bro. Pitts and we set up three meetings. It was clear that we had some differing views doctrinally and Bro. Pitts was already a legend and known for being able to run circles around people biblically and could debate with the best.

In our three meetings we discussed Bible doctrine, family, church leadership, finances, race and racism, and people. In all three meetings it was just he and I. All three meetings were at the church building and maybe one was in his home. To this very day the full explicit contents of those meetings are only known by Bro. Pitts and I. He never brought me before a committee, I never submitted a resume, and I did not do a three-night preaching audition for the office. At that time Bro. Pitts was about 74 years of age. I guess he had watched me long enough and at the end of our third meeting and after having exhausted all there was for us to discuss, I said “Do you still want me as the new preacher?” He said “yes.”

The West Oakland Church of Christ is my first work as a congregational preacher. I had never been an assistant, associate, or even youth minister before, and Bro Pitts was asking me to become the new preacher of a congregation where he had already labored almost 50 years. In our conversations he did not ask me to come over to help him, be an assistant/associate, or even a co-minister. He asked me to become the new preacher of the congregation 16 years ago. 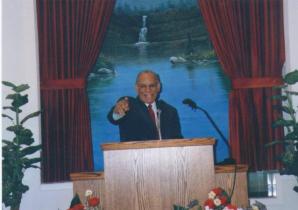 At the age of 30 in January of 2001 I officially became the minister of the congregation, at the appointed hands of Bro. Pitts. Thus for the past 15 years my life was interlaced with his. We discussed everything. I never made one decision without the approval of Dorris. If I had an idea and I saw he did not really like it, I did not do it. He would ask me deep and complex Bible questions and watch me squirm, ponder, and search for answers. Of course he would be laughing. Some of his questions could not be answered, but his mind never stopped. He told me he only had a third grade education, but he was one of the smartest, quickest, and intellectually savvy men you could ever meet. As we would sit in my office he would say about his biblical theology on a given contentious or hot topic (motioning with his hands) “I got this thing so tight, it fits like a glove.” He would ask me in his classic voice almost at a whisper “Can you pull on it?” In our private biblical conversations he would challenge me to unravel his tight fitting theological glove. Of course I was never really successful, but despite any differing beliefs we had, it never altered our love and mutual respect.

Bro. Pitts was a man of faith and that allowed him to entrust a congregation that he built to my care. If there was a difficult decision to be made I would always consult with him, but he would always say, “You have to make a decision.” The transformative impact of Dorris Pitts on my life is unexplainable. He took some deep elements of my life out of theory and thrust me into praxis. He forced me to study the scriptures like I never had in my life. The questions he asked, and the scenarios he posed, catapulted me into endless biblical investigation. Because of him, my father, and men like them, the journey continues.

His faith was evident because although I grew up in the church, I was not seminary 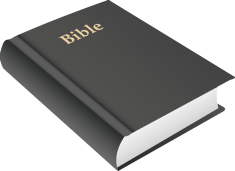 trained, I did not attend church of Christ colleges like SwCC (although I wanted to), Harding, Pepperdine, or Oklahoma Christian, I was just an organically homegrown church boy, converted and called by God to do His will. As I said before, although I was preaching regularly at my home congregation, Forums, and other congregations upon request, I did not have a title. I was not a youth, assistant, or associate minister.

One of the things that I marvel at the most is the fact that Dorris Pitts was not just a preacher, he was a minister. He knew how to serve and meet the needs of people. His Christian life was about action and not words. He was the preacher that would take sisters grocery shopping, to the doctor, to the bank, and more. His integrity was matchless. I started watching him on a deep level when he was 75 and his pace was that of a man in his thirties. I cannot even imagine what Bro. Pitts was like when he first started preaching. I am sure he had the type of energy and zeal that was unstoppable. I could say so much more about The Unshakeable Fabric of this Preacher.

The funeral service for my beloved preacher yesterday was surreal (4/27/16). I kept my emotions in check during the service, but once I returned to the car with my wife, I could no longer contain or hold back the tears. It seems unreal that he has now transitioned into glory, but at the same time he is now where he preached and taught so feverishly so all people would end up where he is. I will have to adjust to ministry without Bro. Pitts as a physical pillar. Even though for the past few years he could not attend church services because of his health condition, it was still comforting to know that his physical presence was close. I would rather have him present in this life with me than not, but God has called him. While Bro. Pitts lived I vowed to be his biggest protector from church adversaries and today I shall continually strive to move his legacy forward through the providence of God.

Bro. Pitts, I will always love you and will not forget the deposits you made in my life. As I write with tears streaming down my face, only God knows why you called me into such formal ministry and now I am left without you. You are already missed and my relationship with you will always be cherished. You are probably quizzing the Apostle Paul right now. I love you Bro. Pitts… 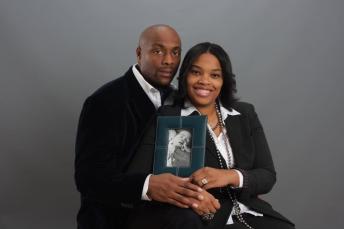 Posted on April 30, 2016, in Uncategorized. Bookmark the permalink. 1 Comment.

← Is Punishment Still the Name of the Game?
Police Encounters #5: No Words Spoken →